The First Evangelic  John 4; 1- 42
In his morning prayer, a Jewish man thanked God that Hehad not made him a Gentile, a slave, or a woman. 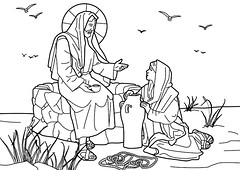 This is a narrative about a Samaritan woman and her encounter with Jesus at Jacob’s well, and had affected on her, and the people who lived in Samaria in a village called Sychar. I will demonstrate that Jesus is the Messiah who came in the flesh  and was foretold by the prophets in the Old Testament. I will also show you that he came into the world for such a woman like the Samaritan woman. Who was an immoral person who lived outside the of God will just a view of the world, and was the Savior of the world. Approximately noon the hottest part of the day, Jesus was sitting at Jacob’s well, and just finish walking all morning and was tired and thirty, from the  long journey. A woman approached him to draw water from the well. Jesus requested water from the women. She said How could you asked for water from me since, she was a Samaritan, and  He was Jewish?   Since Jewish people did not  did not associate with the Samaritan people. Actually, the rabbis also treated women like second-class citizen and they  would not allow them to be teachers nor teach them. A common Rabbis pray in the morning would be  “ Where he would thanked God that He had not made him a Gentile, a slave, or a woman.” Because Jesus was a Rabbi, he broke the Jewish traditions when He spoke with the woman. The woman was missing the point, Jesus being patient with her echo in these works, “You would have asked for Him, and He would have given you living water.” The woman noticed Jesus had nothing to draw the water from the well, since the well was too deep to fetch the water, and she said, “You have nothing to draw with and the well is deep. She still wasn’t getting the point, again Jesus was being patient with  her. Jesus uttered these words,“ Everyone who drinks of this water will thirst again; but whoever drinks of the water that I will give him shall never thirst; but the water that I will give him will become in him a well of water springing up to eternal life.” She stated these words, Sir, give I some of this water so I will not have to draw water from this well in any more! Once more missing the point Jesus said go get your husband and come here, she said I have no husband Jesus said, You have correctly said, ‘I have no husband’; for you have had five husbands, and the one whom you now have is not your husband; this you have said truly.” The Samaritan woman was immoral, and Jesus drew that out of her. Note that Jesus did not mention that she was a Samaritan (mixture of Jewish blood & Assyrian blood & were despised by the Jewish people, and Samaritan hated the jews as well. A stigma that hung around her neck and the Samaritan people, and felt like a millstone around their necks.