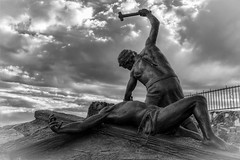 Why The Saints Endured Suffering In Christ Name

“You were born entirely in sin,” they replied, “and are you trying to teach us?” Then they threw him out. When Jesus heard that they had thrown the man out, He found him and asked, “Do you believe in the Son of Man?”

I will never leave you or forsake you. The Lord is my helper, I will not be afraid.

What will man do to me?”

Yet, God is not, or idly sitting by or isn’t incapacitated of stepping to assist His own God is still sovereign. While the curse of sin is the cause and effect of suffering, However, He uses suffering as tool for his sovereign purposes. To build character and strengthen the saints in times of trouble waters when declaring the gospel. If only Son Jesus Christ was called to suffer shouldn’t His follower bear his scars as well when testifying about Jesus Christ atoning works. It was effective tool against the lost.

For example, when Jesus uttered these words.“ Elí, Elí, lemá sabachtháni? My God, My God, why have You forsaken Me?” In that moment of time all of mankind sins fell upon Him, and His Father wrath fell upon Him as well. In short, He made Jesus who did not know sin to become sin to mankind. So that, we will become the righteousness of God through Jesus Christ.

When the saints testify Christ atoning works to the non believer, and when they persecute saints. They remember Jesus endured on the account because theirs sins. Jesus went to Calgary Cross willingly. Or also known as Golgotha meaning a place of scull. Just on outskirt of Jerusalem. Where in span of twenty fours hours. He endured severals legal proceeding, mocking, beating, Hie closest friends desert Him and one betrayed while another denied Him three times. Along with two criminals where mocking Him, and His own Father deserts Him when He was enduring both physical and psychologic pain. When the curse of sins fell upon Him.

When presenting the gospel either they accept it with a great delight since sin is like steel ball that hung around the person neck, and they’re set free or redeemed from the curse of sin, or they kill the messenger. For example, Steven the first martyr was stoned by enraged mob. Just before pass away he saw Jesus the Son of Man standing at the right hand of God! And uttered these words, “Lord Jesus, receive my spirit! “Lord, do not charge them with this sin! ;” Than he fell asleep.

The blind beggar in the gospel John uttered these words concerning Jesus before Pharisees, “We know that God doesn’t listen to sinners, but if anyone is God-fearing and does His will, He listens to him.  Throughout history, no one has ever heard of someone opening the eyes of a person born blind. If this man were not from God, He wouldn’t be able to do anything. After spoke these words Pharisee toss him out temple, and first person he encounter was Jesus. Jesus revealed him that was the Son of man, and believe him, and he began to worship Him. In short, they met Jesus, and it had effect on their lives, and committed to follow Him even into death.

According to Foxe book of martyr prior to being burn at stake.  A saint got on his knees before the stake, and thanks God that worthy to suffer in Jesus name.

While other story and another saint took his the chain off. His fellow comrades were in shock fearing was he going to recant. He ensure them that he wouldn’t recant. He just wanted to Jesus face once more time. He saw Jesus the Son of Man standing at the right hand of God! He put the chains back on and went up with flames along with his follow comrades. Receiving his crown of martyrdom.

Yet, another saint will being tortured felt the initial excruciating pain of the torturer hand; however, soon after he saw a cross with Jesus on it. He was consoled and encouraged In which aided him to endure the agonizing pain of torturer hand.

According to Foxe Books of Martyr wrote this account concerning martyrs saints  “ The whole of these seven martyrs undress themselves with alacrity, and being prepared knelt down, and prayed with an earnestness and christian spirit that even the enemies of the cross were affected after invocation made together, they were secured to the stake with unsparing flames, they yielded their souls into the hands of the living Lord.”

Roger Hope former papist named . In which he live a licentious, a lover of bad company. Where he has trust of his master he was entrusted  thirty pound, and spend on gambling tables. Unable pay it back he went to a maid who had christian principle. A gave him a thirty pound note. With condition that abandon all lewd and vicious company; that you neither swear nor talk immodestly, and game no more. Furthermore attend the daily lecture at Allhallows ,and sermon at St Paul’s every Sunday. That you cast away all your books of popery, and in their place substitute the Testament and the Book of Service, and that you read the Scriptures in which he comply.

Within half year he became a zealous professor of the gospel, and was an instrument of conversion to his father and others whom he visited in Lancashire, to their spiritual comfort and reformation from popery.

When he, with six others was taken not far from St. John’s Wood, and brought to Newgate upon May-day, 1558. He was called before the bishop Dr. Chedsey. Even thou he expressed much affection for him, and that should he consider following popery and Roman Catholic Church doctrines. A practice that  Roger once practice fervently. Where he utter these words, “I was apprenticed, that I was of your blind religion—that which now is taught, and that I obstinately and wilfully remained in it. I could for money have them absolved.

So straitly did I observe your rules of religion, that I would have ashes upon Ash Wednesday, though I had used ever so much wickedness at night. Until “God hath opened the light of his word, and called me by his grace to repent of my former idolatry and wicked life. The antiquity of our church is not from pope Nicholas, nor pope Joan, but our church is from the beginning, even from the time that God said unto Adam, that the seed of the woman should break the serpent’s head.”

That person is Jesus the Lamb of God who take away the sins of the world.  God’s Son has authority  purged sin . Not a priest or any other person is able to perform this feat  only Jesus can redeemed you from your sins. Furthermore He stated these words, “ So crafty is Satan to devise these his dreams, (which you defend with fagot and fire,) to quench the light of the word of God; which, as David saith, should be a lantern to our feet.” and continue with these words. “St. Paul had rather have five words spoken with understanding, than ten thousand in an unknown tongue, and yet will you have your Latin service and praying in a strange tongue, whereof the people are utterly ignorant, to be of such antiquity.“Christendom besides, never received your service in an unknown tongue, but in their own natural language, which all the people understand. ”

The bishop said his words were blasphemous, and ordered the keeper to take him away. On  six June 27th 1558 he and six others were executed.  John Fox penned these words, “When the Christians, upon these occasions, received martyrdom, they were ornamented, and crowned with garlands of flowers; for which they, in heaven, received eternal crowns of glory.”

Perhaps the words by  Sergei Kourdakov a former KGB intelligence officer who persecuted the church in Russia and was very good at job afflicted as much terror on the Christian church in.  Witness this account and wrote in his memoirs these words, “At last she gave in and began sobbing. When I was so exhausted I couldn’t raise my arm for even one more blow, and her backside was a mass of raw flesh, I pushed her off the table, and she collapsed on the floor.” It was the girl he was beating that later changed his life.

”As my arm was raised, I heard her words: ‘God,forgive this young man.Show him the true Way. Open his eyes and help him, dear God‘. I was stunned. Why doesn’t she ask help for herself instead of me? She’s the one about to be finished off. I was angered that she, a nobody, would be praying for me, a leader of the Communist Youth League! In a flash of rage, I gripped my club tighter and prepared to smash it against her head. I was going to hit her with all my might, enough to kill her. I started to swing. Then the strangest thing happened. Someone grabbed my wrist and jerked it back. I was startled. It was hurting. It was not imaginary. It wasIf we believe that Jesus of Nazareth is the only begotten Son of God and that He came into this world and went to the cross of Calvary and died for our sins and rose again in order to justify us and to give us life anew and prepare us for heaven-if you really believe that, there is only one inevitable deduction, namely that He is entitled to the whole of our lives, without any limit whatsoever.”

I realized I was carrying a heavy psychological load, which I cannot explain. It was as if my heart had been replaced by a heavy rock, pressing me down. There was something very wrong with life, with me. But I told no one.” Sergei realized something in his life was wrong. He became a follower of Christ  while living in Canada and wrote book The  Persecutor wrote these words about Natasha And finally, to Natasha, whom I beat terribly and was willing to be beaten a third time for her faith, I want to say, Natasha, largely because of you, my life is now changed and I am a fellow Believer in Christ with you. I have a new life before me. God has forgiven me; I hope you can also. Thank you, Natasha, wherever you are. I will never, never forget you!”

On January 1, 1973, at the age of only twenty-two. Sergei was found dead in a hotel room. Shortly after publishing The Persecutor Sergei could not keep silent anymore. The Christian movement that he was attempting to eliminated. He  willing died for sake of the gospel.